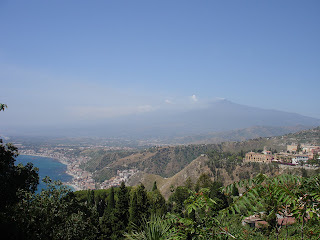 Taormina
This trip is a study in contrasts, from the damp chill of London and Sussex to the arid and intense heat of Sicily. Our Sicilian trip took us first to Taormina, the Greeks called it Naxos. Ancient Town near Mt. Etna, built on steep hills that require lots of stair climbing - particularly if you are to reach the B&B we stayed in. But it was worth it given the stunning view of the whole town, the coastline, and Mt. Etna (see above - that really was the view from our balcony). Mt. Etna lets off steam by day and at night one can see the lava glowing through the vents. Taormina is the site of the ruins of an ancient Greek theater which is quite spectacular.

We rented a car and drove to Syracusa next. It's a fairly seedy town, but the Greek ruins are not only impressive, one can see Greek plays there. We saw a production of Agamemnon while munching on olives, bread and salami. A day later we drove to the area around Ragusa, stopping in the baroque town of Noto, with all sorts of ornate architecture fashioned of yellow stone. 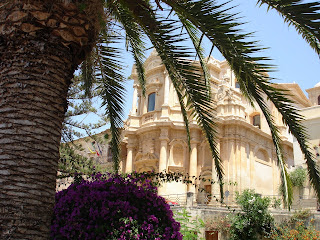 Noto
In this area, we stayed at a vineyard in Vittoria which produces both their own wine and olive oil. Agro-tourismos are nice alternatives to hotels for spending a night or two in rural Italy. Azienda Agricola COS was particularly attractive and very friendly, AND they had a great swimming pool. Their food philosophy is to use only the local ingredients and grapes for their wine. They even use the traditional Greek amphorae to make one of their reds. We had dinner there one night, trying two of their wines - which were really fantastic, particularly the Cerasuolo - a combination of Nero D'Alvola and Frappato. In the heat of their summer, a traditional Sicilian breakfast is granita with brioche (think sherbet on a roll), which sounded funny to me but tasted really wonderful, especially the almond and coffee flavored ones. 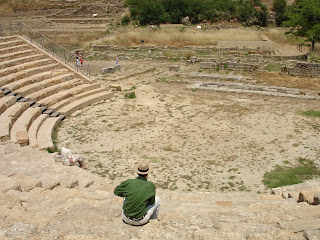 Morgantina
We drove from there to Morgantina - an incredibly well preserved Greek ruin and still an active archaeological sight, notable not only for detailed homes, shops, senate and theater (there is a picture of it above, with The Ragazzo closer and Mom sitting all the way up in the front row) but it was a particularly enjoyable sight for me for its being unfrequented by tourists. Not a bus or a postcard shop in sight. 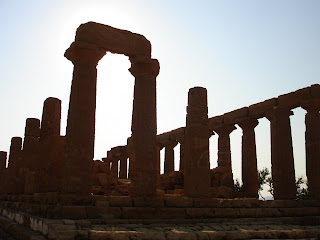 Valle dei Templi
The following day we drove to Agrigento, home of The Valley of the Temples - another spectacular set of ruined Greek Temples that are particularly well preserved and very large, though much more commercially oriented. They are set on a high ridge which has a view of the Sea. Driving to Catania, where we are now, we stopped at the Villa Casale Romana, which is a ruined Roman estate that features really stunning mosaics. 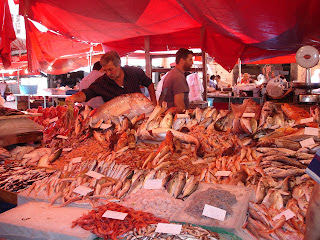 Catania Fish Market
Catania is a lovely town but it is unbearably hot and I am sited-out. After visiting the market, Mom went off visiting a museum but The Ragazzo and I are reading our books and staying cool at the hotel.

Suprisingly, I have gotten in a fair bit of reading too! I've re-read Chiam Potok's The Chosen, read the new Charles Baxter novel The Soul Thief, tried a book of Cees Nooteboom (who I have wanted to read since I started visiting Amsterdam ten years ago). Lost Paradise was heavy on atmosphere but, to be honest, didn't do a whole lot for me. Margot Livesey has a new book out called The House of Fortune Street, which I finished last night. Now I've begun Joseph O'Neill's Netherland, which is at least as good as everyone has said it is - strongly written and captivating from the get-go. More complete reactions when I return. We fly back to London tomorrow to visit with friends and family and get in one more night of theater and then...Home, James! Despite the lovely things that have surrounded me every day and the terrific food and wine, I'm looking forward to my own bed.
Posted by Ted at 6:22 AM

I really like to read your blog.
It feels as if I was on the road!