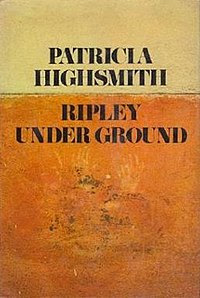 With the economy gone to the dogs and our health going to the pigs and an all-round atmosphere of hysteria that is becoming the real reason for worry, I thought it the perfect time to bring back our favorite psychopath, Tom Ripley to really give us somewhere to place our anxiety. When last we met our hero in The Talented Mr. Ripley, he managed to improve his circumstances. Starting out, he was a poor abused orphan running tax fraud scams out of an accounting job in New York. He managed to pass himself off as the friend of a very rich young man, Dickie Greenleaf, whose father then sends him to Italy to try and lure his son back to the U.S. to and join the family business. Tom murders Dickie and manages to impersonate him for months and live off his money. Then he writes Dickie's will, making Tom the heir of his income and as the net tightens around him, Tom escapes to Greece. About 15 years later Tom is married and living near Paris with a fantastic art collection, but he hasn't lost his taste for scams. This time, he is having an artist paint pictures for a popular painter named Derwatt, who has drowned. They sell his paintings through a gallery, run an art school in his name, and endow him with a reclusive character and a residence somewhere in Mexico. As Ripley Under Ground begins, a wealthy art collector suspects that a work he bought from the gallery is a forgery and Tom decides to impersonate the painter to allay the collector's fears. Already one can see the layers of impersonation that are the theme Patricia Highsmith explores in the Ripley books - Tom is the master of manipulating identity because he is so disastisfied with his own. Tom wonders, as he readies himself for his role as Derwatt:

The thing that is so clever about this scam is that so many of the paintings bearing Derwatt's name are already forgeries, so if one has Tom Ripley's rubbery sense of identity one can equally ask - what is a genuine Derwatt painting? If there are more forgeries than there are actual Derwatt's and people pay for and enjoy the forgeries as originals, don't they become original. Well, no Tom, no, they don't . But Tom is unrivaled in the plasticity he is able to endow the props that constitute an identity - one's face, one's signature, one's clothes, the turn of phrase that other's recognize one by - these are all mere playthings to Tom. And he interacts with few people, manipulating things from a distance so that the life of the impersonated is just a shadowy illusion and those that have met him are then hard pressed to remember exactly who they met. This new scam is a bit different. Tom must assume a disguise and meet someone on demand - face to face - as the man he impersonates.

So far the plot is fun enough, but only having read a few chapters in, Highsmith has not yet embroiled us in the tremendous sense of suspense she was able to cook up by the end of first Ripley book. So far I am actually a little disappointed with the clumsy exposition and the feeling that her efforts to set up another clever impersonation for Tom are a bit contrived, but I am going to suspend judgment and read further since the first book really delivered the goods after a while. I also really wanted a plot-driven book to accompany the slower-paced Margaret Drabble novel I am reading. We are getting near the end of the semester and with the burden of a lot of projects, when I escape into a book I really want to be grabbed!
Posted by Ted at 7:20 AM

I too wish to grabbed by it!


BTW, everything distils into reading is my new blog. Please do visit it, subscribe to it or follow it! Do help me spread the word.