The secrets of attention all wrapped up... 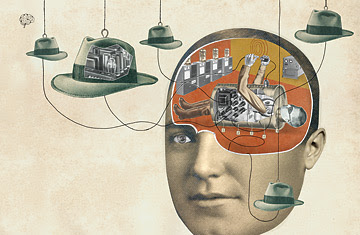 Not..., according to John Tierney's article in today's Science Times:


Now that neuroscientists have identified the brain's synchronizing mechanism, they've started work on therapies to strengthen attention. In the current issue of Nature, researchers from MIT, Penn and Stanford report that they directly induced gamma waves in mice by shining pulses of laser light through tiny optical fibers onto generally engineered neurons. In the current issue of Neuron, Dr. Desimone and colleagues report progress using this "optogenetic" technique in monkeys.

This article focused around Winifred Gallagher's book about attention Rapt: Attention and the Focused Life which explores such subjects as the fact that attention is a limited resource, that it can be directed. It was written out of Gallagher's experience of wanting to control her attention away from the cancer diagnosis she received, so it would not completely take over her life. She cites William James as her muse "My experience is what I agree to attend to." That's really only one form of attention, one we have named selective attention, for obvious reasons. There are other mechanisms of attention, namely those which don't ask for permission - a car backfires as you are quietly having a drink at a sidewalk cafe and you jump, your body on guard, your heart beating quickly for a moment. A baby cries (evidently we may be hard-wired to never be able to ignore this sound). That is 'attention' too. But selective attention can be applied immediately after our attention has been wrested away by external stimuli, and that is Ms. Gallagher's interest. William James also famously said in 1890 that while everyone knows what we mean by attention we don't know precisely what it is:


Every one knows what attention is. It is the taking possession by the mind, in clear and vivid form, of one out of what seem several simultaneously possible objects or trains of thought. Focalization, concentration, of consciousness are of its essence. It implies withdrawal from some things in order to deal effectively with others, and is a condition which has a real opposite in the confused, dazed, scatterbrained state...

A prominent model of attention suggests that it involves the synchronous oscillation of neuronal activity, but what does that mean? Oscillation is the repetitive variation in time or space of something about a central point or between different states. For example, the swing of a pendulum about its center or the vibration of a

plucked guitar string about its normal straight lines when at rest between its pegs. As Gyorgy Buzsaki writes in his fascinating book Rhythms of the Brain, those patterns exist due to forces in nature - what goes up comes down. Those rhythms of change are often illustrated as cycles per unit of time or a Hertz. Cells throughout the body, including the nervous system, are capable of generating patterns of such activity, with alternating high and low points about a center - working in concert to create self-sustaining patterns of behavior. They do so on a mechanical level so that we may walk, breathe, and circulate blood without consciously coordinating those tasks and giving away our precious limited cognitive resources just to stay alive. But patterns of firing are the coding of the cognitive activities of the brain as well. Many neuroscientists now think that, large groups of neurons synchronize their firing at a certain rate (namly the gamma frequency between approximately 30 and 90 Hz, pictured above) that may facilitate attention since, as Buzsaki writes:


Systems in balance are simple and hard to perturb.

Tierney describes the neurons as 'firing on and off,' which is not completely accurate. Neurons don't turn 'off' per se, but neurons some distance away from each other in our brains can synchronize the rhythm of their activity - that is to say, they line up the peaks and troughs of their wave-like pattern of variation. Say there are 2 competing stimuli in our visual field and we only wish to pay attention to one of them. Pascal Fries and his colleagues have shown that when the object we want to pay attention to is present, the gamma frequency increases in that group of neurons our visual system requires to "see" the desired object. We observe more intense firing as well as more synchronized firing specific to those neurons. Conversely, in those neurons that could give attention to the object we wish to ignore we observe a decreased firing rate and less synchronization of activity. So we see on the cellular level an analogue for what goes on at the behavioral level, that is, giving more cognitive resources to some processes while giving less of those resources to others.

The article mentions the prefrontal cortex as the source of this synchronizing gamma activity. I had thought that altered firing originated subcortically and a network of prefrontal and parietal activity were both necessary to apply it, but the prefrontal cortex is involved. Check out Tierney's article, it mentions some nifty new devices designed to artificially deliver a synchronizing jolt of gamma activity for those with brains that have a harder time doing so in a self-directed way. This is quite an innovation if it turns out to be both safe and effective.
Posted by Ted at 7:51 AM

Hey David -
Haven't read it myself, most of my recreational reading falls outside the brain these days.