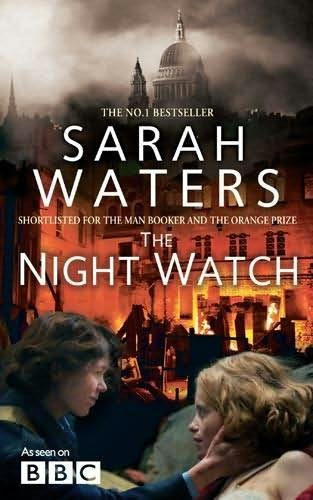 World War II plays an important role in both the novels I started reading this week. Started reading? I have an exam coming up in two weeks. Yes, exactly. And if you are still here after that little conversation with myself, I have been quickly pulled into 1940s London by Sarah Waters The Night Watch. Everyone has been going on about her storytelling abilities and just 60 pages in I can see what they mean. I find wartime London a darkly fascinating place (and it has made a great setting for a number of novels.) I was fond of Christopher Fowler's Full Dark House and I currently have two of Patrick Hamilton's novels set in that same period heading my way after an impulsive splurge at The Book Depository. At any rate, Waters powers of description are precise and have a bit of music to them, but they aren't fancy. The narrative seems to tug at you from the far end to keep moving.

The day seemed limp, suddenly: not fine so much as dried out, exhausted. She thought she could feel dust, settling already on her lips, her lashes, in the corners of her eyes. But she wouldn't turn back. She had, as it were, her own brushed hair to live up to, her polished shoes, her cuff-links. She went down the steps and started to walk. She stepped like a person who knew exactly where they were going, and why they were going there - though the fact was she had nothing to do, and no one to visit, no one to see. Her day was a blank, like all of her days. She might have been inventing the ground she walked on, laboriously, with every step.

I love that last sentence - inventing the ground she walked on... I am most taken by Waters's characters. She does not seem interested merely in types, but in singular people - a woman who walks the streets dressed as a man, a young boy who works in a factory, buys bric-a-brac, and lives with an older man, a religious healer who treats the crippled. People who contain more in them than first meets the eye...More soon. 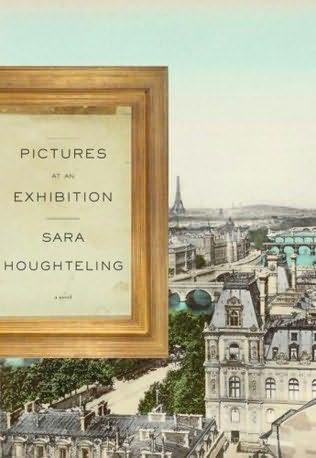 Pictures at an Exhibition by Sara Houghteling arrived at my library faster than I had expected when I put it on reserve. Here the novel begins at the other end of the War, 1939 Paris, to be precise. In it, a young man whose father owns a flourishing art gallery is forbidden to join the family business. They are Jewish and are soon to lose the gallery, and the Braques, Manets, Picassos, and Matisses will, no doubt, be looted by the Nazis. The story is framed retrospectively and each chapter starts with an image of one of the pictures that was looted (some never recovered). The tone of the writing is elegant, a bit old world, and over that an elegiac patina...

In the twilight of my life, I began to question if my childhood was a time of almost absurd laguor, or if the violence that would strike us later had lurked there all along. I revisited certain of these memories, determined to find the hidden vein of savagery within them: the sticky hand, the scattered nuts, the gap-toothed girl grasping a firecracker, a cap floating on the Seine, flayed legs swinging between a pair of crutches, the tailor and his mouthful of pins. Some of these were immediately ominous, while others only later revealed themselves as such. However, whether or not another boy living my life would agree, I cannot say.

As I read that opening paragraph it seemed to herald good things to come. The story is familiar to me - a family in France, or Austria, or Germany on the eve of World War II - will they stay or will they go? What are the details that lead up to their decision. Can they bear the betrayal of their own country? This is my family's story, so the particulars are endlessly interesting to me. Houghteling captures Paris as it existed for this family before the war and follows it as the clouds gather almost imperceptibly. I am not fully convinced by her abilities to assume the character of a male narrator. The voice sounds the occassional false note for me, particularly when dealing with adolescent desire, but she may be trying to set up the innocence of an earlier time, so I'm being patient. All in all I have been quickly subsumed in Houghteling's narrative and am looking forward to the quick 10 minute snatches of reading that are my reward between study sessions. Study sessions. Gotta go.
Posted by Ted at 8:06 AM

Sarah Waters keeps popping up thesedays. I should break down and give her a try. She's on the Booker long list this year, yes?

So far I am finding her very entertaining - good w/ plot and character. I have her latest on the pile as well - the little stranger - but I haven't yet been struck by the right mood for it. I also believe she is a sister in our church.

I haven't yet read any of Sarah Waters' books either. Given your recommendation of her great story telling abilities, I am going to have to give her at try. I happened to stumble across a great World War II book myself, written by Evelyne Tannehill. The reason why I am mentioning this book is because of this author's ability to retell her own story of living in Germany at the time of the war. She really captures her thoughts, feelings and memories of her past! Excellent read! Thought you might be interested in checking her out also.

Thanks for that recommendation, Becky, and also for stopping by. I'll check out that book.