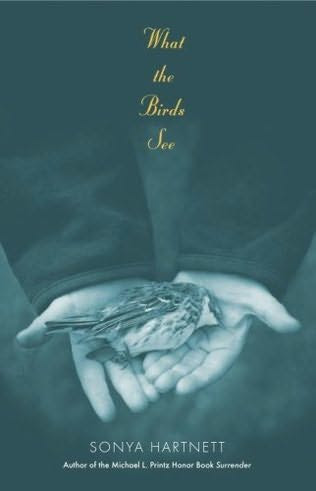 Sonya Hartnett was a new author for me and her What the Birds See a potent, deeply imagined, and lyrical book. Thank you A Devoted Reader for introducing me to it. Adrian is a sensitive nine year old who could live in a suburb anywhere. He is deeply lonely, having been first removed from the care of his mother, then rejected by his father, and finally placed in the care of his grandmother who, she makes quite plain, thought she was done with raising children. Then comes the disappearance of the Metford children:

Chistopher was five, with a child's ponderous gait; his older sisters, leggy as fillies, must match their pace to his. Zoe's thoughts would drift as she ambled, lingering on insects and flowers. Bending again to her garden, the mother knew without calculation that her children would be gone for half an hour: fifteen minutes to the shop, fifteen minutes home.

The route they'd take to the shop would bend around four corners of the suburban neighborhood: two right turns, two left. Their neighborhood was a modest one, and the distances between the corners were not great. The result of all the twisting was that no one who saw the Metford children walking through that clear afternoon would see them for very long.

There is a great precision in the way Harnett writes, and also a lyricism that renders this narrative slightly dreamy. As his wild hair is tamed by his grandmother she says:

But his fingers are drawn like thieves to the glittering dresser set that hold pride of place on the table top, a hand mirror and hairbrush rested on a matching sparkling tray.

But her language is not pretty for prettiness's sake, nor is it dreamy for dreaminess's sake, it is meant to evoke the state of mind of Adrian - desperately lonely, inexperienced of the world, unsure how it works. His own fingers seem to him to have a will of their own. His naivitee makes it as if he is viewing the whole world through a sheer curtain, the details of forms only occasionally coming into focus.

It has never occurred to him - and he blushes faintly, for being so stupid - to think that children can vanish. The Metfords have not been lost or abandoned - they have been made to disappear. They have not run away - they have been lifted up and carried. They've been taken somewhere as distant as Jupiter. Adrian has never thought that an ordinary child, a kid like himself or Clinton or that freckle-nosed girl, might be of interest to anyone except family and friends, that an ordinary child could be worth taking or wanting, a desirable thing.

One of the most touching details of the novel is the fact that Adrian derives his greatest comfort not from a person or an animal but from a bronze bowl with a frieze of flowers, mounted on clawed feet with a carved cherub serving as the knob on the bowl's lid.

Three fingers fit nicely around the putto's tombola-sized head, and its chin is polished from years of being thus grasped to lift the lid, but when Adrian pincers its ears between his fingers, he imagines the cherub's shrieks of insulted rage. Of all the things in his grandmother's house, his favorite is this cocky angel on a bowl. It pleases him just to see it, to sniff its archaic aroma, to touch its patina hide.

Adrian uses this bowl, feeling its form, to comfort himself in moments of anxiety.

The striking narrative voice Harnett uses is an effective hybrid. It is at once child-like in perspective (but not childish and not cute) and yet adult in its knowledge for instance:

Arian does not know why, but every time Horsegilr's madness flares, he fears for the soundness of his own mind. He worries that what lives so violently within her is also living in him. He fears that Horsegirl is contagious, to nobody but him.

I can easily attribute those feelings to nine-year-old Adrian, but the sophistication surrounding it is from a more worldly perspective. Or:

Adrian has never thought that what happened to him had been cruel - children inhabit an animalistic world and accept with grace its harsh rules. He never considered anyone to blame but himself, really. But he'd been glad of the girt of anonymity that the new school have him: at just eight years of age, he had started over again.

Harnett's has imagined an original tale and told it in beautiful prose. Its effect is strikingly poignant. I recommend this book heartily.
Posted by Ted at 7:27 AM

I'm so glad you enjoyed this, Adrian's poignant story and the lyrical language its told in have stuck with me since reading it and are certainly worth recommending.