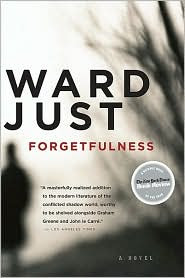 I had my introduction to Ward Just's work with his newest novel, Exiles in the Garden, just a few weeks ago. That book made enough of an impression on me to want to read more. Thank you Mike B. and JRJ for both recommending Forgetfulness, which I finished last night. This is the best fiction I have read since Molly Fox's Birthday. A marvelous and potent book about our recent past, and it is no easy feat to write a novel of our time without trapping the book in lingo and preoccupations soon to be forgotten, joke intended.
** THIS WHOLE REVIEW IS A SPOILER, SORRY. THERE IS NO WAY TO WRITE ABOUT WHAT IS GREAT IN THIS BOOK AND NOT WRITE ABOUT THE PLOT** The book, opens with Florette, a French woman, who becomes trapped in a snowstorm in the Pyrennes on her afternoon walk, breaks her ankle, and is picked up by three strangers who carry her on a stretcher as she slowly dies while moving out of present and past reveries. I wrote about my initial thoughts here. The rest of the novel follows Thomas, Florette's husband, a transplanted American painter, as he adjusts to his life without her.

Thomas's two boyhood friends, who work for the CIA, figure prominently in Forgetfulness. The worlds of this novel are post-9/11 Europe and America and, in a nutshell, Ward considers deeply with this book versions of life post-pain, post-loss, in which one seeks justice and in which one does not. Thomas is a painter, a man prone to reflection rather than violence. But he has done his share of odd jobs for his friends working in espionage. He now must wonder if any of his past actions could have been responsible for Florette's death. Bernard is determined to help his friend by pulling some strings and capturing the men who murdered Florette. He does so, and the crux of this novel is his arranging Thomas's witnessing their interrogation by a French operative expert (who moonlights doing Moliere with the Comedie Francaise). Ward's prose is measured, unsentimental, yet he is capable of drumming up a storm of tension as he does in a magnificent extended scene during which these two artists, the interrogator Antoine, and the painter Thomas, try to exact their measure of justice from the suspects. (I won't say how). The scene is a tour-de-force. I scarcely breathed as I read it, just wishing I could move my eyes faster.

Florette was not an ordinary woman, though I suppose that could be said of almost any woman. No one you knew well was ordinary - and if you loved her, then she was not only not ordinary but unique.

This is the crux of suffering, isn't it? Loss is entirely personal. Your loss is a fact, terrible though it might be. My loss is a tragedy. Victims of wars have been saying some version of this to each other as justification for their next killing for as long as there have been nationalistic or tribal struggles. Ward mixes political players and artistic ones like an artist mixing paints on his palettes, blending the two impulses of humanitarianism and desire for retribution. The impact of this book is how Ward allows them to play out in the hearts and the actions of artist and interrogator.

At one point in the book, Thomas visits one of the cemeteries on the Somme and reflects on World War I.

The Great War was a titanic struggle, a soul struggle, a struggle of civilizations, except it was the same civilization divided only by language and national custom. No one who lived through it returned from it entirely sane. No revenge was too harsh for the victors, no bitterness too deep for the defeated. The war glorified the values of the slaughterhouse. Nothing could justify it. Nothing could even the score, though a generation later the Germans would try.

The depiction of a struggle of civilizations sums up this novel perfectly, except in this case, the characters of individual men stand for the forces that motivated nations. After loss it can feel like the only way to survive is to remember. Justice for some is to pound our memory of our loss into the face of whomever we blame. If the men in a jail cell in Le Havre really did murder Florette and are successfully manipulated, will that really get them to mourn her uniqueness as Thomas does? And if one chooses not to hit back - does that really mean we've forgotten? Forgetfulness is at once deeply considered and action packed. The writing is calm and masterful and its preoccupations are still, largely, our own. It is everything I hope for in a great novel.
Posted by Ted at 7:47 AM