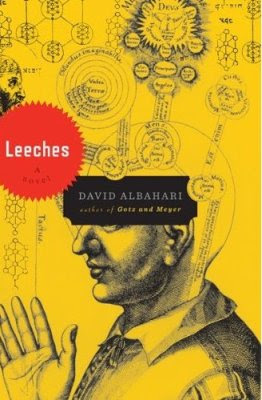 David Albahari's Leeches came to me courtesy of Houghton Mifflin (thanks!) and is not due out until next April. It is a feverish and fantastical Kabbahlist conspiracy fantasy set in Belgrade in the 1990s, when first Yugoslavia and later Serbia was under the rule of Slobodan Milosevic. His revisionist and corrupt reign produced, among other things the murder of political opponents, and a hysterical nationalism that included persecution against non-Serbian ethnic groups, which, as usual, included Jews, even if they were Serbian.

The protagonist of Leeches writes a regular column for the newspaper. He, like many of his compatriots living in post-war madness, is eager to make some meaning of his chaos. Then he begins to receive messages (or are they?). First he witnesses a man slapping a woman on the banks of the Danube. Then he discovers small symbols around the city containing triangles inside a circle, whose meaning he tries to discover by contacting a mathematician.

What had been happening around us the past few years convinced me that my life was, for all intents and purposes, over, that I was now living at a later time, in a life with no life. The war, inflation, poverty, political terror, hatred, all of that confirmed the berserk nature of the world that was supposed to be my home. Marko was right: you couldn't imagine living like that forever. Forever dead, possibly, but at its best life was an accumulation of fragments, a makeshift raft barely afloat. Am I sinking, I asked Marko, or does it just feel that way? Marko didn't answer. He closed his eyes, leaned his head against the wall, crossed his hands in his lap. With the tip of his tongue he touched his upper lip. All I want, I said, is to understand what's going on. Not the war, I hurried to add when I saw Marko's raised eyebrows, not the war, I will never be able to understand that, I gave up trying long ago, but the thing on the Danube, the reality of absurdity of the slap, the meaning of the circle around the triangle, the song I hear in the courtyard on Smaj Jovina Street. Marko sat there, silent. Nothing exists alone, I said, everything is interconnected...

The story of Leeches is this search, during which he meets an old Jewish painter, an alluringly beautiful woman, uncovers a historical library in a high rise apartment and eventually discovers a magical living text (book lovers, beware) which endlessly reconstitutes itself. As a result of the world of intrigue he is subsumed into, our columnist begins to expose the jingoism and anti-Semitism he witnesses around him, at great cost to his own safety, and ends up participating in some sort of great cosmic machine whose denouement is fantastical (and perhaps stretches credibility just a tad).

David Albahari creates the inescapable paranoid momentum of his narrative by rendering this novel as one long, uninterrupted paragraph. When this is working, the story seems tumble inevitably forward, but there are some earlier stretches during which it takes a while to accumulate momentum. I found the first 50 pages a bit of a slog, but after that, this story gets going. Our protagonist is a sympathetic fellow and I got caught up in the mystery of what was going to happen next. I'm not sure if the occassional lulls in the narrative were a result of Albahari's writing or his translator Ellen Elias-Bursac's. One aspect of the book that had an impact on the narrative rhythm, which I think would be important to the author, was the layout of the text on the page. I don't know if the ARC was different from the ultimate design of the book when it is released, but if the text had been less densely laid out on the page, as a narrower column, with a little more white-space on either side, my eye would have scanned the page more quickly.

What is most successful about Leeches is that Albahari combines the feeling of a contemporary thriller with a book about a serious subject - how the inaction of a person to the persecution of others amounts to complicity. The narrator may have begun his involvement unwittingly, but he takes up the cause of his Jewish countrymen with energy and without questioning that it is the right thing to do.

The Danes, the story goes, saved their Jews in World War II by wearing yellow armbands, so perhaps we could save our Jews and ourselves by joining them as victims of violence.

Albahari has created a story in Leeches that is entertaining, a little fantastical, set in an interesting time and place, full of enough intrigue to have one glancing over one's shoulder after putting it down, with a compelling and somewhat bookish plot, a smart compassionate message. Look for it when it comes out in April.
Posted by Ted at 9:19 AM