A battle for connection (Books - Solace by Belinda McKeon) 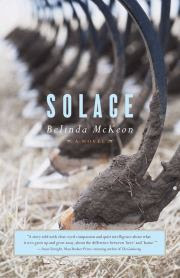 Perhaps I am influenced by having just revisted Howards End, but I read Belinda McKeon's debut novel Solace as a portrait of two men, father and son, who wage a battle to connect.  This is not merely a portrait of the generation gap as Mark and Tom Casey are separated by more than their ages.  Tom, the father, farms while Mark, his son, earns a doctorate in 19th century English literature at Trinity College, Dublin.  They are separated by their work, their geography.  Tom is taciturn, Mark more emotionally accessible.  It is across the abyss of tragic loss that they finally must reach out toward each other, but simultaneously the reader can observe the other kind of connection about which Forster writes. How in their struggle to accept the other person these men become more whole themselves.


She ignored him, her steady chatter all for herself, her attention now on the toy set of keys she gripped and shook with one fist.  From her lips hung a heavy thread of drool.  He reached over to wipe at it; she jerked her head away, her babble pooling into a squeal.  But he got it, caught its glooping wetness of his cuff, wiped it into the thigh of his trousers as he turned in for the house.  Aoife whined and banged the toy against the side of her seat.

McKeon's exactness at describing the externalized details of behavior makes the reader feel a witness to the events of the plot rather than a reader of a retrospective report. She is adept at revealing psychology, allowing the reader to gradually build a sense of character by witnessing small, everyday acts - as we do in our lives - allowing our acquaintance with a character to grow over time, rather than wielding her omniscience to set it at the outset.


His father had never been one to talk on the phone, but that did not mean he relinquished his determination to know - and, as though by a sort of hypnosis, to control - what was being said and what was being agreed to at the other end of the line.  Mark had seen it countless times: his mother, standing at the kitchen counter where the phone was kept, trying to get the conversation over with, while his father sat nearby, his chin pushed into his knuckles, his eyes roving the floor as he followed and weighed and dismantled every word - the words he could hear and the words at which he could only guess.  It was a harmless charade, really, comical half of the the time, because half of the time his father got it all areseways: the imagined details, the assumed scenarios.  He was bored, Mark knew; he craved news, craved some new narrative to add to his day, and if, eavesdropping on Mark's mother's phone call, he couldn't glean that thing ready-made, he would invent it for himself.

It is sometimes easy to lose sight of the craft of the writer to our appreciation of their product which grips us with the flow of a great plot or touches us with the depth of a character's psychology.  But reading McKeon reminded me of the obvious (the recognition of which, to paraphrase Orwell, requires a constant struggle).  The craft of writing is the use of words to fashion those products, and this is where McKeon's artistry shines with precision and freshness.


"Yeah, sure," Mark said, as a fist of anticipation opened, warm and opiate, within his chest.  "Sure we're in no rush."

It is a fist opening and not, for example, a flower that allows the reader to form a picture of a man, a bit tightly wound right now - and coursing through his veins a drug used both to eradicate pain or to create pleasure - a word reminding us of the contemporary, urban context in which he lives.


For Mark, Tommy was just there, and then one day he was just not, and he could still remember the shock of seeing his father cry at Tommy's funeral.  It had been like watching a wall of the house fall away.

The potency of this image drives home the epic scale of this experience for Mark.  It gives his father in one sentence the solidity of a physical structure, and more than any structure, the structure in which Mark lived.  Bearing witness to this event destroyed something previously inviolate, something that exposed Mark.  As that wall peels away, in my private movie of the moment, it is utterly silent, the fall seems to take a long time.  The eventual impact with the ground creates a huge crash followed by a cloud of dust.

The power of Solace was in McKeon's patient sequencing of detail.  Its moments resonated personally again and again, not because these events happened to me, but because the richness of the sensory details as revealed through language enlivened my own fantasy.  It is a lovely and enveloping reading experience.
Posted by Ted at 11:06 AM