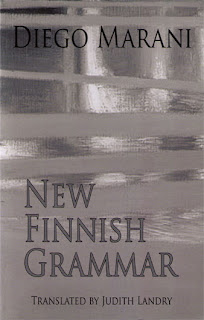 Language is identity, according to Diego Marani's New Finnish Grammar (2000).  It was originally written in Italian, recently translated into English by Judith Landry, and short-listed for the Independent Foreign Fiction Prize.  Dr. Petri Friari, a neurologist aboard a German hospital ship in 1943, discovers a man barely alive with no memory and no language.  Wearing a Finnish navy uniform jacket with Sampo Karjalainen embroidered on it, Dr. Friari identifies his patient as Finnish.  It is difficult to say whether it is the evidence that convinces him or the fact that Dr. Friari is himself a Finnish exile and for this reason has taken his patient's case very much to heart.  At any rate, the Dr. teaches him some language basics and ships him back to Finland advising him that in learning the difficult language he could reclaim his memory and, thereby, himself.

Doctor Friari felt that in some abstract way we both belonged to the same world.  We were bound together by some mysterious link, some bond which was not to do with blood, but which resonated in the sound of language.  In the doctor it revived the sweetness of memory, and in me it aroused the will to live.

In his new country, Sampo Karjalainen, if that is his name, encounters a fanatical priest who fills him with the spirit of Finnish legends and a young nurse who, unlike Sampo, finds solace in forgetting.  Readers and writers are often gourmets of language.  This novel's love of language is elegiac.  Language is meant to be the very salvation of Sampo Karjalainen.  The one and only way he can rebuild his sense of who he is.


Bent over an old yellowing notebook gradually filling with new words, day after day I learned what I believed to be my mother tongue, conjugating verbs and declining cases, reciting prayers, singing the hymns from the services and learning strange stories from the Kalevala...

- but I found the relentless lyricism forced.


I had never realized that the word Raamattu derived from Grammar.  It is only of those things that is so utterly obvious that you fail to notice them.  Yet perhaps it tells us a lot about the Finns' own deep love of their own language.  For us, language is the word of God, even when you don't believe in him, and grammar is an exact science, made up of commensurable meanings and based on unquestionable theorems.  The right word gives thought a sense of harmony, the mathematical inevitability of music.

The conceit of the story, that Sampo had lost his memory, and with it all language, didn't work as Marani had fashioned it as Sampo's first person narrative from the notebook given to him by Dr. Friari.  How can the words be his own when he is a character without language?


'The time has come for you to face this journey.  You must not be afraid.  Basically, this journey is a return.  Here you are living in a sort of limbo, a no-man's-land, your life is in abeyance.  Do you understand me?'

I nodded, even though I had barely grasped the meaning of what he said.


Perhaps I would have found this story more convincing written as a third person account.  It hurt more than it helped that the doctor made excuses for his narrator.


The reader should not take this document as a reliable account of historical events, nor expect it to obey the laws of scientific observation.  All it does is to tell one incredible human story.


Today I see, with some surprise, that he had retained my words until such time as he was able to decipher them.

Perhaps it is the cost of working in neuropsychology that I just could not be convinced by this device.  All the more so because the author in the guise of his character the doctor kept asking me to suspend disbelief. People use this cliche as some sort of given for art appreciation, but I find it the mantra of audience members desperate for escape, or the excuse of artists who have not fully reckoned with the elements of their creation.  Great art and great artists build, elicit, coax, wheedle belief from their audiences and Marani failed to do so with the ingredients of his story.  Whatever the beauty of individual phrases or the ideas about identity, and there were many pretty ones, I was left stranded by this novel's concept, finding the first person voice a thoroughly unconvincing form in which to relate them.
Posted by Ted at 7:45 AM

I started reading this review convinced I would love this book and ended it wondering if I would. It does sound intriguing, but I can also see how it could become forced by the end.

Still, I enjoyed your review.