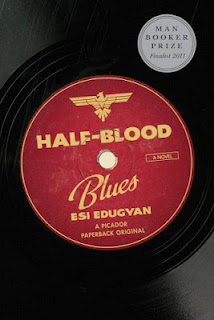 Half-Blood Blues, by Canadian novelist Esi Edugyan, is a jazz musician's memory of his youth in Berlin and Paris on the eve of World War II.  Occasioned by the screening in 1992 of a documentary film about his one-time collaborator, trumpeter Heironymous Falk, bassist Sid Griffiths must unearth old and difficult feelings about art-making and duplicity among friends.

Edugyan moves the action between 1939 and 1992 as her cranky narrator tries to hold back the past from encroaching on the present.  The voice she has him sing in, for it does evoke music,
captures the cadences of the more relaxed African American and German dialects shared among the musicians, some of whom are American and some German, deftly switching to let us know Sid is speaking hochdeutch as necessary. The Hot Time Swingers consists of Sid and his childhood friend Chip Jones, both African Americans, though Sid can 'pass' as white, Fritz and Paul - both blond, German men, only Paul happens to be Jewish - and Heironymous, also a  German, but with black skin. The Nazi's race laws treated these men differently - sometimes based on their physical appearance, sometimes on their ancestry, and other times on their country of origin - and this figures in the plot.


Chip pour hisself a finger of gin.  He turn around, lean back with his two elbows perched high on the bar like a damn bird.  "It's a odd thing though.  Till recent, Krauts got some kind of ladder when it come to blacks.  Not like what been goin on with the Jews.  If you a black American, well, you treated alright.  If you a foreign student or singer or somethin, sure.  They ain't want you goin back home talkin bad bout their little utopia.  But if you a black Kraut, a Mischling, like our boy here -"  He glanced at Hiero.  "Well.  It get real ugly."

If this makes Half-Blood Blues sound like some sort of specialized Holocaust literature, think again.  The reason that Edugyan's novel has won the 2011 Scotiabank Giller Prize and has been nominated for half-a-dozen awards including a Man Booker and place on the Orange Prize short list, is because of its universality as a story about learning how to live ones own life.  It is also because of her strong writing. These are not limited to mimetic skills.  She weaves together history and fiction with imagination (Louis Armstrong is a character in the story), beautiful captures moments both tender and hilarious in the unusual domestic lives of these musicians as they run from the Nazis, and finally in sustaining terrific narrative tension in the book's final pages.  It took me a little time to become immersed, but once I did I was really hooked by Sid's flawed and utterly human character, by the way Edugyan captured the jazz artist's life in occupied Paris, and in simply finding out what would happen to Sid.
Posted by Ted at 3:40 PM