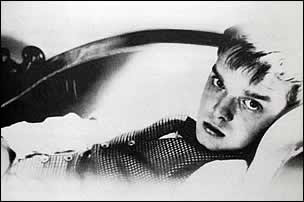 I've finished Truman Capote's In Cold Blood, it's journalism of a heartless and ugly crime written with a sort of dignified grace - as though we sat on the sofa above at the invitation of someone's aunt and ate cake as we watched open heart surgery. The first half was written with a drive that sagged particularly when the murderers were on the lam and there was a good deal of flashback. But I felt that his certainty returned once Hickock and Smith had been apprehended. I felt like the "chase" scene became too extended and the tension flagged - partly because he wanted us to feel how long it was, how long it felt to the town and especially to Dewey - the detective on the case. Capote wanted us to know the almost leisurely progress of the two men, they vacation in Mexico after the crime, so we could see how oblivious they were to what they had done. Mostly, he seemed to want time to set up the backstory of the murderers' - particularly Perry Smith's.

I don't know if I would feel this way if I hadn't seen the movie Capote, but I felt like I was reading it in the book too, Capote seemed in love with Smith. He knew his actions were irredeemable but his heart ached with the shame of who Smith had become as a result of his life. He seemed to look at them as animals, they performed cruel acts out of their nature - and not because it was their nature to be cruel, just because they knew no other way of acting to get what they needed at the time. Like the cats Capote describes:

Among Garden City's animals are two gray tomcats who are always together - thin, dirty strays with strange and clever habits. The chief ceremony of their day is performed at twilight. First they trot the length of Main Street, stopping to scrutinize the engine grilles of parked automobiles, particularly those stationed in front of the two hotels, the Windsor and Warren, for these cars, usually the property of travelers from afar, often yield what the bony, methodical creatures are hunting: slaughtered birds - crows, chickadees, and sparrows foolhardy enough to have flown into the path of oncoming motorists. Using their paws as as though they are surgical instruments, the cats extract from the grilles every feathery particle. Having cruised Main Street, they invariably turn the corner at Main and Grant, then lope along toward Courthouse Square, another of their hunting grounds - and a highly promising one on the afternoon of Wednesday, January 6, for the area swarmed with Finney County vehicles that had brought to town part of the crowd populating the square.

With this paragraph, not only does Capote create an extraordinarily detailed metaphor, he also brings us to the Courthouse for the arrival of Hickock and Smith following their confessions in a most unexpected way. He has shadowy lighting - as it is twilight - and blood and feathers littering the scene without ever mentioning the crime. Capote masterfully creates the atmosphere of this moment that would otherwise be a description of a waiting crowd, tension, and a car - and he accomplishes that courtesy of two cats.

Although none of the journalists anticipated violence, several had predicted shouted abuse. But when the crowd caught sight of the murderers, with their excort of blue-coated highway patrolmen, it fell silent, as though amazed to find them humanly shaped. The handcuffed men, white-faced and blinking blindly, glistened in the glare of flashbulbs and floodlights. The cameramen, pursuing the prisoners and the police into the courthouse and up three flights of stairs, photographed the door of the county jail slamming shut.

No one lingered, neither the press corps nor any of the townspeople. Warm rooms and warm suppers beckoned them, and as they hurried away, leaving the cold square to the two gray cats, the miraculous autumn departed too; the year's first snow began to fall.

Now were those cats really there in that square? Was that really the first snow on that precise evening? If not, it sure makes a good story.

There are many other singular touches - the Meiers a couple who are caretakers of the courthouse prison and the relationship that evolves between Mrs. Meier and Perry. A description on the sumptuous meal she makes when an army friend of Perry who has volunteered to be a character witness, visits him in his cell. It is she to whom Perry gives a photo of himself at 16 - the way he wishes to be remembered - before being taken to the penitentiary and the gallows. She tries to feed the squirrel that Perry befriended in his cell, but says "...he won't have anything to do with me. It was just Perry he liked."

Capote write a portrait of another inmate Andrews - a remorseless, bookish psychopath - who becomes Smith and Hickock's neighbor on death row. Through his story, he engages in an interesting analysis of the laws regarding insanity pleas and the doctor's evaluation of these three killers.

In an odd twist at the end, Hickock requests that his eyes be given to a needy recipient upon his execution. One of the witnesses to the execution muses:

Can't say I'd want to be that somebody. I'd feel peculiar with them eyes in my head.

In a way, that's what In Cold Blood is like, being temporarily given a new pair of eyes through which to see a cruel murder, an act about which one has a certain predictable sense of one's expectations. It is still cruel and we can see that, but we see certain things with those new eyes that challenge our usual expectations.

what page is the cat metaphor on. in "In cold blood"?