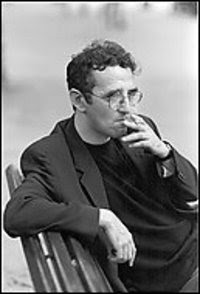 I just noticed I'm reading In Cold Blood and The Savage Detectives at the same time - such violence in my choices. What's with that? In Cold Blood continues to startle me. I'm half-way through now, reading about the early life of Perry Smith, one of the two murderers, a man with a hard shell encasing an artist's soul. They are about to be caught and I feel kind of sorry. I started reading the Capote to keep up with the Joneses, or to keep up with the O'Malley actually, but I also started it in desperation to get out of reading the Bolano. Can anyone tell me why I'm supposed to be liking The Savage Detectives? I read and enjoyed Last Evenings on Earth - the volume of short stories that served as the wider reading public's introduction to this highly praised Latin American writer, who died a few years ago. Francine Prose and John Banville are hyperbolic on the book jacket, Susan Sontag gushes. I'm 75 pages in, it's 1978 and Juan Garcia, a 17-year-young Mexican boy, stops going to law school to become a groupie with a bunch of underground literary types who publish a subversive magazine and who have decided that novels are heterosexual and poetry homosexual. Poets could be further subdivided into the categories: faggot, queer, sissy, freak, butch, fairy, nymph and philene. Evidently Whitman was a faggot, Neruda, Blake and Octavio Paz were Queer and Verlaine a freak.

Our first-person narrator is a wannabe at literature and manhood - and the translation - particularly the dialogue - reads very stiffly to me:

"Sometimes I dream that I'm in a city that's Mexico City but at the same time it isn't Mexico City, I mean, it's a strange city, but I recognize it from other dreams - I'm not boring you, am I?"

"As I was saying, it's a vaguely strange and vaguely familiar city. And I'm wandering endless streets trying to find a hotel or a boardinghouse where they'll take me in. But I can't find anything. All I find is a man pretending to be a deaf-mute. And worst of all is that it's getting late, and I know that when night comes my life won't be worth a thing, will it? I'll be at nature's mercy, as they say. It's a bitch of a dream," he added reflectivley.

The stiffness makes a novel about literature, a chore to read. Adolescent obsession is something I really don't have to live through a second time. I find Juan Garcia's utter lack of self awareness makes it completely uninteresting to read about. At least Holden Caulfield had a sense of humor. And the dream of machismo Juan Garcia is so eager to fulfill in this world of pimps and poets just seems silly and dated. I find nothing to admire in machismo, and am not as drawn to the romance of seedy as I am to some other kind of environments, but I don't think I am limited in this way when the medium compels me - I'm a big fan of the songs of Jacques Brel. I thought that the movie The Beat That My Heart Skipped was great. Both the book and film of Midnight Cowboy, though as seedy as can be, are somehow romantic - it's a real love story. These aren't worlds I want to live in, but they were made accessible to me through works of art. But this endless series of all-night cafes, semen, and a literature that is talked about but that we never see, is wearing thin on me.

Have any of you read this? Does it get better?
Posted by Ted at 8:01 AM

Ted, when your done with In Cold Blood you might want to look at this YouTube link to see what the area looks like today and to see some crime scene photos. It really struck home with me and I haven't read the book in over 20 years.

Just cut and paste the link into your browser if you're interested.

Thanks, Sam, I will look at it as soon as I'm finished! That will be interesting in a creepy sort of way.