Lies, both historical and domestic (Books - The Archivist's Story by Travis Holland) 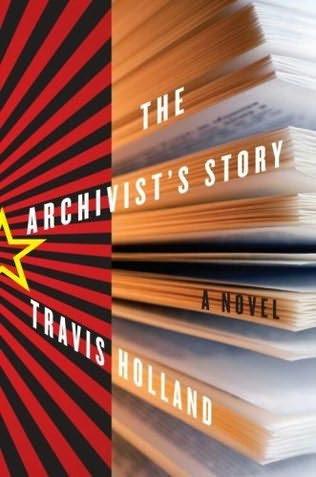 Pavel, a literature teacher in Stalinist Russia, loses his job after assisting a student to denounce a fellow member of the faculty, and gets himself hired as the archivist at Lubyanka, where those accused of crimes against the state were often imprisoned. Many of those thought of as a threat to Stalin and his killing machine were writers. Pavel finds himself asked to interogate one of his favorites, Isaac Babel.

Pavel says, "I've been asked - ordered - to clear up a discrepancy in your file. It's just a formality."

"What sort of discrepancy?"

"A manuscript my supervisor happened upon while reviewing your file. A story. Quite a remarkable story. There's no record of it in the evidence manifest, which means it can't be officially attributed to anyone, yourself included. Which means, officially speaking" - Pavel shrugs uncomfortably - "it doesn't exist. As I said, it's just a formality. If you could perhaps take a look, tell me if you recognize it. Can you read without your glasses?

Obviously Pavel is not a man born to carrying out interrogations. During the course of the meeting, Babel and Pavel find out they have something in common besides their love for a good story.

"I promised her we would see each other again," Babel says. "Will they let her visit me, do you think?"

"I wouldn't want my last words to her to be a lie."

"Of course not." Come with me, Pasha. Please. To which Pavel had replied: I will see you soon. His last words to Elena. The memory is enough to drive Pavel from his chair - he cannot face Babel. At the bureau he sets down his tea glass, then thinks, I wish I had gotten on that train.

As if picking up on this, Babel asks, "How did your wife die?"

"She was on her way to Yalta. The train derailed."

"The police suspect it may have been sabotage. Something laid across the tracks." Pavel must gather himself before continuing. "From what I was told, she was thrown from the carriage when it broke apart." A pumpkin, Pavel thinks: The image has stayed with him all these long terrible months, the line of wrecked carriages split innocently open like pumpkins on the snow. It is easier to envision this than to confront the images Pavel has repeatedly driven from his mind. Elena spilled out in the filed; Elena in the back of a truck, wrapped in a sheet; Elena at the mouth of the crematorium, the tray beneath her trembling on it castersa s the morgue attendant pushed her into the fire.

"I can't imagine people intentionally doing that, " he says. "Can you?"

Babel stares bleakly down into his glass. "You've read my stores," he says finally, looking up at Pavel. "Your colleagues, when they came to arrest me at my dacha, they dragged my wife along. Did you know that? They made her knock on the door. In case I resisted. Can you imagine how she must have felt, to have to do that?" An edge of bitterness has crept into Babel's voice." You are not the only one who has lost his wife."

Pavel turns away. A sob rises in his throat and is out before he can stifle it. For a moment he is overcome with a desire to sweep the samovar onto the floor, to knock his empty tea glass and the tin flying - the temptation is so strong Pavel must clutch his hands together, forcing them down.

"They shouldn't have taken your glasses," he says quietly.

The result of this meeting is that Pavel finds the story in the archives and sneaks it out of Lubyanka. Woven into Travis Holland's The Archivist's Story this story are many additional plot threads - Pavel's mother is suffering from health problems, the question of his wife's remains, an elderly neighbor and her pet pug, a former teaching colleague - all more or less domestic issues - through which we experience how individual lives in Stalinist Russia were impacted by the politics. The central action of the novel comes down to the question of what kind of man Pavel is. Is the the kind who will return Babel's story to the archives and save his skin, or the kind of man who will keep it for himself and perhaps others to read for its beauty?

Pavel becomes paranoid, resembling another great Russian literary criminal, Raskolnikov. He greatly fears being found out and is repeatedly interrogated himself by a superior officer in scenes that Travis Holland has written with great intensity and well imagined details. That is what largely characterizes this brief exciting novel - good attention to detail, some scenes suffused with great tension, and others dealing with simple human loss, experienced by most human beings. This is all set on the eve of the second world war, and the question of whether Germany would break the pact it formed with Russia and invade Poland. Holland has used these historical events in such a way that the promises and lies on a domestic level are mirrored by the promises and lies on a national level and, somehow, when Germany finally does attack Poland (something I know to have happened as an historic fact), it seemed surprising as it must have at the time to many Russians. Travis Holland's prose is straightforward, and his sense of history skillfully integrated with an involving plot. An excellent novel for my penultimate read of the year.

If I can manage to finish Saul Bellow's The Actual by midnight, that will bring me to 70 books for the year. It's a short book, but we have a lot of party prep to do, so I had better get cracking.
Posted by Ted at 8:34 AM

Thanks C.B., right back at you.