Art and artists of a summer's day... (Art - James Ensor at MOMA & Books - Beautiful Shadow, The Children's Book, and The Snow Geese)

A variety of activities at Bookeywookey central this weekend which all began with seeing the James Ensor show at MOMA. Who? I didn't know his name either. Ensor was a mid-nineteenth to mid-twentieth century Belgian painter. His worked spanned styles from the impressionism of his early contemporaries to the expressionism of his later ones, and spanned subject matter from domestic portraits with a stunning sense of light to Belgian carnival masks, to satire of both religious and contemporary artistic iconography. Great show and it's just opening in case you're around NYC this summer.

Got a chance to dip back into Andrew Wilson's very thorough, though longish biography of Patricia Highsmith - Beautiful Shadow. In it I learned of her novel The Tremor of Forgery, thought by many to be her best and most serious work. I am going to have to see if it's available at the library. I was struck by this quote from the character of Derwatt, the artist who is the subject of Highsmith's second Ripley novel, Ripley Under Ground.

There is no depression for the artist except that caused by a return to the Self.

That certainly sounds as thought it were true for Highsmith. The other posts on this biography are here: 1, 2, 3. 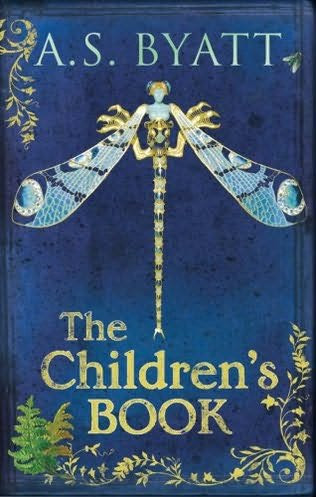 I have also made a dent in A. S. Byatt's latest novel The Children's Book, though it's only about 150 pages. It is plain to the eye what her subject matter consists of, but I'm not sure what it all adds up to yet. There is a well-to-do family and their friends, who relate to the world in a more conventional fashion, and there are also a bunch of artistic folks, most of whom seem to be Fabians, who are involved in issues of social justice and free love. The piece is set prior to World War I and seems to pit forces of convention against forces of chaos in all sorts of complicated ways. The cast of characters is broad and the saga is long. So far let's say I feel admiring of Byatt's beautiful prose but rarely propelled by the action. There are several artists among the characters - a pupetteer, a potter, and a writers of children's stories. Byatt is certainly more at home writing about writing than she is writing about artistry of a more viceral nature - like throwing pottery. The writing on the puppet show, however, is lovely:

An illusion is a complicated thing, and an audience is a complicated creature. Both need to be brought from flyaway parts to a smooth, composite whole. The world inside the box, a world made of silk, satin, china mouldings, wires, hinges, painted backcloths, moving lights and musical notes, must come alive with its own lawas of movement, its own rules of story. And the watchers, wide-eyed and greedy, distracted and supercilious, preoccupied, uncomfortable, tense, must beomce one, as a shoal of fishes with huge eyes and flickering fins becomes one, wheeling this way and that in response to messages of hunger, fear or delight. August's flute was heard, and some were ready to listen and some were not. The curtains opened on a child's bedroom. He sat against his pillows. His nurse, in comfortable grey, bustled about him, and her shadow loomed over him on the white wall...

Her writing really can cast a spell. I'm suspicious that the art-making will become a more far-reaching metaphor but I'm not sure how yet.

Finally, having enjoyed William Fiennes memoir The Music Room so much, I tracked down his first book The Snow Geese while in England. Also a memoir of sorts, or perhaps it would be more accurate to say that it is non-fiction, but Fiennes story is not merely of his subject, the geese, but of his discovery of them, his following their migratory pattern, and the effect of that journey on him. While at school, Fiennes falls ill with some illness that demands a lengthy recovery. During that time, he learns of the snow geese and read's Paul Gallico's story The Snow Goose and is moved to pursue them in their natural habitat from Southern Texas to Baffin Island in Hudson Bay. He travels to Texas and awaits his first glimpse:

The first sign was a faint tinkling in the distance, from no particular direction, the sound of a marina, of halliards glicking on metal masts. Drifs of specks appeared above the horizon ring. Each speck became a goose. Flocks were converging on the pond from every compass point, a diaspora in reverse, snow geese flying in loose Vs and Ws and long skeins that wavered like seaweek strands, each bird intent on the roost at the centre of the horizon's circumference. Lines of geese broke up and then recombined in freehand ideograms, kites, chevrons, harpoons. I didn't move. I just kept watching the geese, the halliard yammer growing louder and louder, until suddenly flocks were flying overhead, low over the shoulder, the now geese yapping like small dogs, crews of terriers or dachshunds - urgent sharp yaps in the thrum and riffle of beating winges and the pitter-patter of goose droppings pelting down around me. They approached the roost on shallow glides, arching their wings and holding them steady, or flew until they were right above the pond and then tumbled straight down on the perpendicular. Sometimes whole flocks circled over the roost, thousands of geese swirling round and round, as if the pond were the mouth of a drain and these geese the whirlpool turning above it. Nothing had prepared me for the sound, this dense, boisterous din, the clamour of a playground at breaktime, a drone-thickness flecked with high-pitched yells, squels, hollers and yamps - the entire prairies's quota of noise concentrated in Jack's holding pond by the two-storey house and the raised lake stocked with bass for fishing...

There is a lyricism as well as a straightforwardness to Fiennes's writing that I find evocative and moving, especially given that I was never aware of being interested in geese, indeed in birds of any kind.
Posted by Ted at 7:08 PM