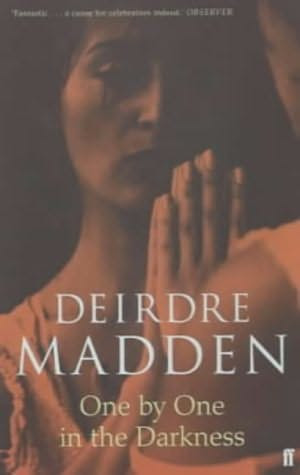 Having been wowed by Deirdre Madden's latest book, Molly Fox's Birthday, which I read on my recent vacation in England, I immediately went in search of her earlier books, finding One by One in the Darkness in an independent bookshop in Chipping Norton. Written in 1996, this is a broader work than Molly Fox's Birthday. It encompasses a familial drama of three sisters, their parents and grandparents in both the present and the past, in parallel we read an account of how the armed struggle in Northern Ireland in the same time periods affected individual lives. The sisters have chosen very different paths, or perhaps the paths have chosen them but, at any rate, Cate finds herself in a glamorous editing job in London, while Helen works as a lawyer in Belfast dealing often with work related to the political struggle. Sally lives in the country with their widowed mother, teaching primary school.

She woke early in the morning. Not surprisingly, she'd been sleeping badly in recent weeks, and she lay now for more than an hour thinking about her family. She like to imagine them still asleep, each of the three women lying in the warm darkness of her own room: Helen in her house in Belfast, Sally and her mother at home in the country. Late when Cate rose and moved about her flat making coffee and preparing her luggage for the journey, she thought of her family waking. Helen would stretch out her hand and switch on the radio, would like there drowsing and listening to classical music. Sally would go downstairs, and, still in her dressing gown and lseepy-eyed, would stare blankly at the cloudy sky while she waited for the kettle to boil. She would make tea, and bring it upstairs to her mother's room...

A common theme between the two Madden books I just read is this practice of characters imagining others' lives, not a surprising activity for a writer, and one that seems to form the backbone of her narrative. Madden's writing is straightforward but it does not spoon-feed the reader. She asks that you pay attention. Character is developed through uncliched and idiosyncratic details, such as Kate changing her name to Cate when she moves to London to either escape her past or seize her present (take your pick). The first shift from the present day narrative to the past is accomplished without fanfare, the only differences being the details of the action and a slight shift in tone. The beautifully subtle give-away was the spelling of Kate's name, suddenly beginning with a 'K.' The novel is full of delicate touches like that one that demand attention of the reader.

But imagining other's lives is not merely stock-in-trade for the writer, it is the necessary ingredient for empathy, moreover it is Madden's charge to her reader. As such Madden's novels, and indeed all art that makes this endeavor, serve a vital purpose in a world in which so many relationships are selfishly motivated and violently expressed. This book's events are the stuff of lives everywhere - the current generation disturbing the traditions of the past, sibling rivalry, school, work, illness, death and birth - but that doesn't make this book ordinary. The writing is observant, touching and would be eligiac if it didn't include the present-day narrative off-setting the one in the past. This interplay asks the reader to ponder influences and consequences rather than let sentimentality color the past either with too rosy a complexion or one that is too maudlin. One by One in the Darkness is a deeply felt but contained narrative, sophisticated in its brevity but simple in its diction, sending me in search of yet another novel by a writer I am coming to love for her clarity, passion, and humanity.
Posted by Ted at 6:41 AM