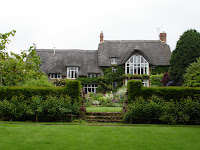 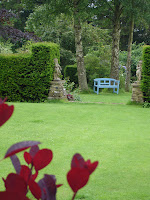 This is the B&B we stayed at in the Cotswolds and its garden. Some rain gave us lots of time for reading, but we also took several hikes on the wonderful network of pubic footpaths that cut through fields and woods across the U.K. Unlike the U.S., where keeping other people off one's land seems a priority, in England, although the farm belongs to the farmer, its beauty is shared with walkers. One can walk for hours uninterrupted and mostly skirt main roads, enjoying a quiet walk in a natural setting. It appears that hikers are respectful, we did not see a single piece of trash along the way. After one of our hikes we had a great afternoon tea in Chipping Camden. I love meeting artists and visiting their studios and try to do this wherever we visit. Our hosts introduced us to a local artist whose work we we found interesting and we had some coffee with her and checked out her work. Our long hike from Chipping Norton took us to an ancient stone circle known as the Rollright Stones. Chipping Norton also boasts a very nice independent bookshop and Cafe - Jaffe and Neale. As you can soon read in a future post, I was pretty wowed by Molly Fox's Birthday and was able to find a copy of her earlier novel One by One in the Darkness there. 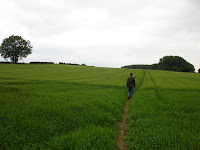 We also attended the Glyndebourne Opera Festival in Sussex, seeing our friends there, 2 completed productions, and 1 in rehearsal. Giulio Cesare, a revival, has justifiably been a great sensation. I had seen it on DVD but it's much more fun live. Our friend, Danielle de Niese, sings, dances and acts Cleopatra (pictured below left) in a performance of gob-smacking energy and beauty. Falstaff is a wonderfully conceived production by Richard Jones set in World War II England. Christopher Purves blends great singing and detailed acting into one unified whole is the title role and Marie-Nicole Lemieux is fantastic as Mistress Quickly. The Fairy Queen, which we saw in rehearsal, looks like it is going to be great fun as well. It features The Orchestra of the Age of Enlightenment under the always strong direction of William Christie and I thought the choreography by Kim Brandstrup particularly strong. 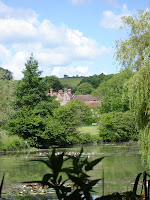 We stayed in the big house at Glyndebourne (pictured above left) which was a lot of fun. Sussex was also the stomping grounds of some of my favorite Bloomsburyites. We visited Vanessa Bell and Duncan Grant's house - Charleston (above right) - and it is well worth a visit. Having worked on a play about Virginia Woolf and her circle for years, finally standing in those rooms next to the wall paintings, their studios, and garden was amazing. Unfortunately, we did not get to see Virginia and Leonard Woolf's Monk's House. Maybe next time.

We also visited Oxford, just strolling around for a few hours. The Blackwell Bookstore there is amazing. Having enjoyed William Fiennes The Music Room so much, I found his The Snow Geese there and picked up a copy. Finally, we spent several days in London. We found the Wellcome Collection's exhibits about mental health and art very interesting and they have a great bookstore as well! We also saw Sir John Soane's Museum, which we missed on our last several visits. His collection includes the Hogarth A Rake's Progress and many antiquities. It's quite a house to spend a few hours in (and it's free). We also attended two productions, both at the National Theatre, J. B. Priestley's Time and the Conways - certainly a play before its time in terms of cinematic use of time. The productions is, sadly, an unimaginative bore - lazily substituting screaming and cliches for acting, actors working from the neck up only. The production would have required some sort of physical language to reveal the special qualities of this play. Sadly, they never didn't come up with one in the first two acts and I wasn't waiting around for the third. The second play we saw was a very hot ticket - Hellen Mirren is playing the title role in Phedre in a strong and accessible translation by Ted Hughes. The production also features Margaret Tyzack and Dominic Cooper. There were some nice moments here and there. I thought John Shrapnel as Theramene turned in the strongest work of the evening. Dominic Cooper's peformance was pretty intelligent and centered and Stanley Townsend had a couple of moments where he was filled with the pain of Theseus's circumstances, but sadly those did not a Phedre make. I found most of the actors substituted vocal technique for real connection with these extreme circumstances. Mirren told us she was moved, horrified, devastated, but rarely succeeded in actually showing us that that was so. When she did her connection seemed banal, theatrical, rarely human. We attended the production with my cousin and his fiancee and heading off to the restaurant, he said to me that he couldn't understand why anyone would want to mount Greek tragedy (via French neo-classicism) as it had no meaning today. This seems to me the one reason for mounting any play - that it has some meaning in the context of our own lives. This production has a clear financial motivation for its mounting and one that would fascinate fans but it did not ably communicate to me any esthetic one. We didn't luck out with our theatre-going in London this time but our visits with friends and family and walking around the beautiful city were pleausures enough.
Posted by Ted at 7:03 AM