Lives past, present, future (Books - The Biographer by Virginia Duigan) 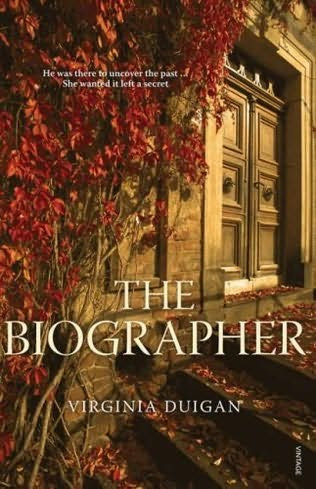 I began Virginia Duigan's The Biographer before I left on holiday and so it sustained me across the Atlantic. I provided a little plot set-up in my first post, so check back if you would like a lengthier re-hash. Basically, Greer, an Australian woman, is swept off her feet by Mischa, a Czech painter whose work is being shown at the gallery at which she works. 25 years later they live in Italy and Antony, an American, is writing Mischa's biography and comes to stay. Greer is uncomfortable about Antony uncovering her past, so the biographer's visit precipitates a spate of going through an old diary, which is how we learn her back-story. The driving question of the novel - is there some big, dark secret troubling Greer, or is she merely uncomfortable because she left her husband to be with Mischa? The initial strengths of this book remained its strengths. Duigan creates recognizable and detailed characters. She sets up their differences well - this is particularly true for Mischa and Greer. The structure of the book means that we slowly earn our information about the past, filling in holes in our understanding of the present people.

She had put her hand into her capacious coat pocket and encountered a bulging plastic bag.

'I nearly forgot. Close your eyes and open your hands. I've got a present for you.'

She pulled it out and spilt a slender arc of ivory sand and a could of fluttering tropical petals, scarlet and gold and purple, into the capacious bowl of his cupped hands.

'The sand was very important to me. It brought back the feeling of being with you, for some reason.' She caught his eye. 'It was so silky and soft, but that's got nothing whatsoever to do with it.'

He looked down at the pyramid of sand and petals and closed his eyes again, 'It is my first and best present.'

She was reminded of the look on his face the day she had first met him. That afternoon he'd been loudly singing and gazing at his own painting of an Aboriginal girl on a piano in a paddock. He had the same expression now. In her diary she had called it beatific, a look of blissful happiness.

'Yes it can, and don't argue. It is the first proper present I have ever been given. Therefore it is also the best.'

On the point of leaving, she had looked over at the painting on the table under the window. 'Do you always take this long to finish something?'

'Are you always so non-observant?'

'Unobservant, if you don't mind.'

Only then did she see that all along the balncony wall, under the frowzy French windows where he had rubbed a few cursory holes in the dust, the floor was littered with discarded drawings. Limbs, breasts, buttocks, hair, torsos, crossed out, drawn and redrawn, and finally a face she knew. Her face. She circumnavigated them in growing amazement...

I like the movement through time in this sequence. It is set in the past, referencing the even more distant past and yet, at the same time, referencing the present time of the narrating of the story, in the future. It is an intimate scene late in the novel and uses everything we have learned of how these two people behave and think. It is intimate, like overhearing pillow-talk. It also introduces some of the weakenesses of the writing - the repetition of the adjective 'capacious' seems unnecessary or careless and Duigan's diction is often fussy in a 'writerly' way.

Duigan also creates a sexual frisson between the young, blond American biographer and several of the characters, including Greer. This device was effective and seemed to cleverly play out the compound terror and allure of having one's self be the subject of intense interest for another. If terrifying it is still thrilling, flattering.

While the strengths of Duigan novels ran consistantly throughout the book, so did the problems. Antony, the biographer, was supposed to be American. Unfortunately his dialogue was not always convincing. Either Duigan wrote more Aussy-Brit diction than is likely for an American or she wished to write a character who automatically apes the diction of the people he is speaking with, but if the second choice is true, she never told the reader about it. The biggest weakness of this novel is that, for too long a time, I couldn't tell if Greer's problem with revealing herself was simply an aspect of her character that provided this novelist with an opportunity to explore the idea of 'self.' Or whether there was some real deep dark secret that most anyone would be anxious of bringing to the surface. The first could make an interesting novel but would require more depth of insight than Duigan was able to muster to let us know what precisely it was about Greer that made it so difficult to face herself. Or if the second choice it would require more suspense to be drummed up - a la Sophie's Choice. ** SPOILER ALERT** Indeed this second choice was the case, but for a long while I couldn't tell, and by the time it was revealed the story no longer held me. Finally, I liked the characters enough that I stuck around until the conclusion, but that was because I had invested so much time already, not because the writing compelled me to do so.
Posted by Ted at 7:23 AM